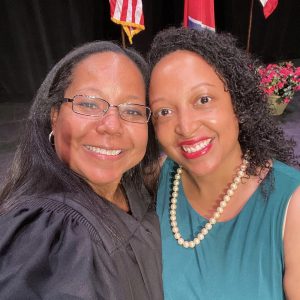 Last week, Judge Robin Phillips Gunn swore in Dr. Dasha Lundy as District 1 Knox County Commissioner. When I reached out to Lundy regarding the occasion, she described it as a “historic moment.” It is undeniable that the visual of Lundy, one of the three black women ever elected to Knox County Commission, being sworn in by Judge Phillips Gunn served as a hopeful portrait of a more equitable and representative future for black Knoxvillians.

THE JOURNEY SO FAR

After a tough primary battle against incumbent Evelyn Gill, Lundy breezed through the general, garnering nearly 78% of the vote against her opponent, Reginald Jackson. What sets Lundy apart is her bold, progressive agenda. She demonstrates a willingness to broach uncomfortable, divisive topics — such as the fate of Knoxville College. She maintains that the school should be restored to its former role as a historically black institution. Other goals related to education include implementing strategies to tackle mental health issues in Knox County public schools.

However, the issue at the forefront of Lundy’s 2020 agenda is restoring Burlington as the cultural and economic downtown of East Knox County. She frequently stresses the 42% poverty rate among black Knoxvillians as a reason to focus on Burlington’s potential, while also avoiding what she refers to as Urban Renewal, Part 2. “We have to be intentional,” she said during our interview, “about creating jobs, maintaining affordable housing, and making sure that our schools have adequate funding and the tools that they need to create our next generation of leaders.”

When asked how it felt to take her oath in front of last Tuesday’s crowd, Dr. Dasha Lundy said it was great to be able to represent the district in which she grew up. “People always said that nothing good comes from East Knoxville,” she said. “That is so not true.”