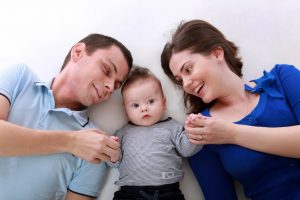 More and more parents are choosing to not get married, even if they have a child together. So how do courts determine custody if the parents aren’t married?

Unmarried couples who have children together go through a different process than married couples to establish custody rights and responsibilities. This process can be understood by answering a few basic questions.

Question 1: Whose child is it?

The answer is, at first, the mother. She has all of the rights and responsibilities while she is pregnant, and immediately after the child’s birth. She says who the father of the child is. (Sometimes, she may decline to say.)

If someone knows they are the father, and the mother doesn’t dispute that, then all is well. Dad’s name will go on the birth certificate, and the parents can move immediately to the next step. If this is the case, determining custody when parents are not married is relatively simple. But what if mom doesn’t believe or admit that you are the father? Or what if dad just isn’t sure?

In either of those circumstances, one of the parents must file an Action to Establish Paternity. They will request, and the Court will order, a DNA test. Most of the time, the person who objects to someone being named the Father pays the initial cost of the test. So, if the Mother objects to a man being named Father, she pays. If the alleged father objects, then he pays. Either a lawyer or the court will tell the individual where to go get a lab test. Then, the case will be reset to review the lab results.

Question 2: Who gets what time with the baby?

Assuming that paternity is established by the DNA test, the next thing the Court will do is to establish a temporary co-parenting schedule. The Tennessee legislature has admonished the Courts to “maximize the participation of both parents in the lives of the children,” and some courts have followed suit. Unfortunately, that rule is not always followed. More often, the mother receives primary custody and the father gets time every other weekend. If the father wants more involvement than that, it is important to have an aggressive attorney who fights for it from the outset.

If the mother has concerns about the father’s ability to care for the baby, she will need an equally aggressive attorney to state those concerns. Be prepared to back those concerns with admissible evidence, such as medical records for your child and background checks for the father, among other things.

Child support is impacted by (a) the time the baby spends with each parent, (b) the income and income potential of each parent, (c) any daycare costs related to work, and (d) the baby’s health insurance and other related healthcare costs. The Father may also be required to pay the cost of the Mother’s prenatal care and the baby’s delivery bill, to the extent that it wasn’t covered by health insurance. The Court will also consider whether either parent has other children they are responsible for.

The process, once paternity is established, typically follows three steps. First, the Court will typically enter temporary orders for child support and co-parenting time. Then, you will likely both be referred to mediation to encourage you to work out the final details yourself.

Mediation is the second step in the process. It’s a great opportunity to lay out the ground rules for your relationship as a parent, especially if you are no longer romantically involved. During mediation, you will explore different and creative options to spend time with and support the baby. You may also address any concerns you have about the other parent, through the help of a neutral third party.

If you are unable to agree…

…Then you will move on to a final hearing. There, you will ask the Court to resolve anything you were not able to resolve on your own. To answer the questions of who gets custody when parents are not married, and who pays for what, the Court will make findings based on the fifteen custody considerations. These are the same custody considerations factored into a decision in a divorcing couple’s custody dispute.

At Held Law Firm, we approach all custody disputes by systematically developing evidence addressing all of these custody considerations. We do this with an eye toward explaining to the Court why you are the best parent for the job. We have built our reputation on our custody files, which when complete, are usually 8-24 inches thick. That’s an impressive display both in mediation and in court.

Whether you are married to the other parent or not, you deserve to have that relationship start off on the right foot. Your child deserves to have a healthy and functional relationship with both parents.

If you’re looking for an attorney to represent you in a custody case, even if you are not married, call (865) 685-4780 to schedule a case assessment withMargaret Held or another Held Law Firm attorney.