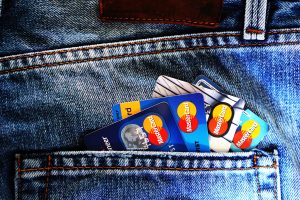 Although it is important to consider how the division of assets impacts the parties to a divorce, debts are sometimes also a major consideration. The court is charged to equitably divide the assets and debts of a marriage. Oftentimes, the party that receives the asset also receives the debt if the asset is not owned free and clear. For instance, if Husband is awarded a vehicle and it has a loan, the Husband is obligated to pay the loan.

What about credit card debts that are not secured by an asset? Credit card debt is considered an “unsecured” debt because there is not any collateral to secure the debt. It is typical during the discovery process to collect information about the debts including copies of credit card statements. Occasionally, one party has no idea about the credit card debt of the other party. If the debts were incurred during the marriage, whether in one party’s name or on joint accounts, they are generally thought to be marital debt unless evidence can be presented that the debt did not benefit the marriage such as trips with a paramour.

The bottom line is that credit card debt has to be allocated in a divorce and if it is a joint credit card, both parties remain potentially liable until it is paid in full. If the final divorce decree requires one party to pay and the debt is not paid, the court can enforce the terms of the divorce decree with the contempt powers of the court. However, the best course of action is to pay or transfer joint credit cards to the responsible party and avoid future litigation.

If you would like to schedule a case assessment with Melanie Hogg or another Held Law Firm attorney, please call 865-685-4780.